Nepal is a Kingdom of high Himalayan Mountains, artistic monuments exotic wild life and diverse culture. It is the land where Lord Buddha was born over 2,500 years ago. Roughly rectangular in shape the kingdom of Nepal is situated between China to the north and India to the south. The land extends approximately 885 km. East to west, and 193 km north to south. Nepal is primarily an agricultural country. Tourism, Carpets and Garments are the major industries. Here are some facts about Nepal.

The terrain rises from the terai, the southern plains covered with tropical jungles and fertile farmland at almost sea level, to the high Himalayan mountains in the north with the valleys and lush green hills in between within a distance of less then 200 km. Eight of the 10 highest peaks in the world lie in Nepal.

Nepal’s many ethnic groups are as varied as its land with their own languages and cultures. In the Kathmandu valley are Newars, whose artistry have earned them an international reputation. The Sherpas of the Himalayas are known as tough mountain climbers. Brahmins and Chhettris are scattered over the hills and valleys, and Tamang are found in the districts around Kathmandu valley. The Rais, Limbus, Magars and Gurungs of the mid hills have earned as Gurkha soldiers. Lowland ethnic group s such as the Maithali, Bhojpuri and Tharu enhance the colorful mosaic, the population of Nepal is about 23 million.

Medium weight and easy to wash cottons can be a good choice year around in the Kathmandu valley. From October to February, woolen sweaters, Jackets or similar other outfits are necessary. Short or long sleeved shirts are good from March through May. From June to September, light and loose garments are advisable. 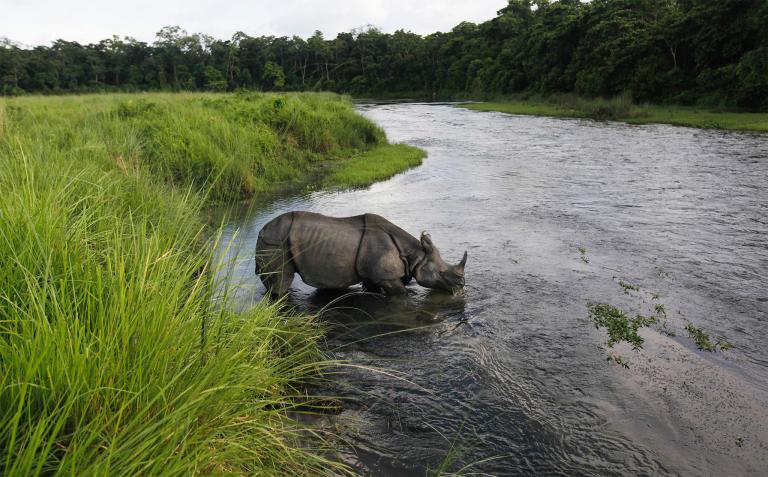 Nepal provides shelter to over 30 species of large wild animals and approximately 180 species of mammals. The rhinoceros, tigers, crocodiles, snow leopard, red panda, Himalayan black dear, and many others beasts are found Nepal’s jungles.
Nepal is also a haven for birds and over 800 species, representing approximately 10% of the world’s population are found here. There are more then 650 species of butterflies and over 6,000 species of months.

Nepali, written in the Devanagari script, is national language as well as the lingau Franca for Nepal ’diverse communities. Many languages and dialects are the spoken in the Kingdom, however, only 8 (Nepali, Maithali, Bhojpuri, Tharu, Tamang, Gurung, Rais, Limbus, Newari, Sherpas and Nepalbhasa) are spoken by more then half million people. English and Hindi are widely understood in the urban centers and places frequented by tourists.