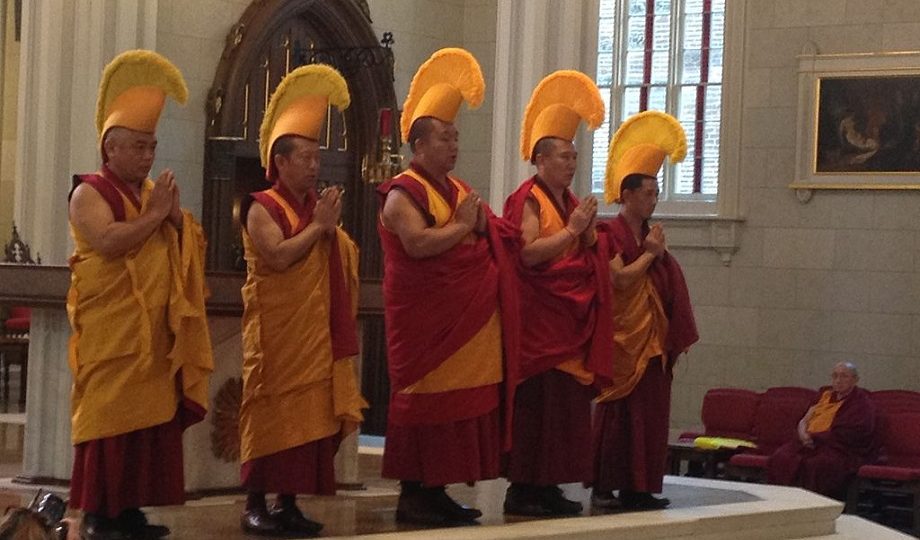 The main religion practiced today in Tibetan society is Tibetan Buddhism. Almost two third Tibetan people dedicate their lives to Buddhism and have so deep faith in it that religion means everything to them. Buddhism, as an official religion of Tibet, continues to play fundamental role in sociological and cultural development of Tibet and Tibetan people.

It is believed that Buddhism was first introduced in Tibet in the 7th century when the then king of Tibet unified the country and took two Buddhist wives; Princess Bhrikuti Devi from Nepal and Princess Wencheng from China. Immediately he established a network of 108 Buddhist temples across the region and started promoting Buddhism in his state. Gradually, Buddhism in Tibet grew to become a special branch different from Han Buddhism and other small religion. Today, it has four sects of belief like Nyingma, Sagya, Gagyu and Gulung. It is also well known to the world through the office of Dalai Lama, the spiritual and political leader of Tibet.

Before Tibetan Buddhism was introduced in Tibet, the earliest religion was a type of animistic tribal belief system where the elements like water, earth and wind were worshipped. Later, bon was introduced during the time of early Tibetan Kings in around 247 BC. Soon after its introduction, it dramatically started getting acceptance from number of people and many people started following Bon shifting from animistic belief system. However, the religion was banned by King Trisong Detsen in the 7th century as he thought numerous animal sacrifices in the name of religion caused economic hardship to the people. It was after the ban of Bon religion that Tibetan Buddhism started getting acceptance.

Besides Buddhism there are many more religions practiced in Tibet. However, other religions have not been able to take deep root in Tibet. While Tibetans primarily believe in Buddhism, a small Muslim community also resides in certain parts of the region. Approximately there are about 2000 people following Islam. Furthermore, a very small group of people follow Christianity. There is only one Catholic Church in Yanjin Village on the Sichuan Yunnan border where about 17 people serves as priests or missionaries. Apart from that, there are few people following Hinduism as well. Most importantly, Tibetan people live in harmony with each other regardless of their religious preferences and are very proud of their religion.

Though Tibetan follow different religions, freedom of religion is not guaranteed in Tibet. Since Tibet is a part of People’s Republic of China, Tibetan people consider that china wishes to control and limit Tibetan Buddhism in order to weaken Tibetan identity and strengthen its control over Tibet. Most importantly, china’s interference and restriction has not diminished the deep faith and belief people have in their religion in any way. They live harmoniously with each other and respect each and every religion prevalent in Tibet.