Home>Flora and Fauna in Nepal 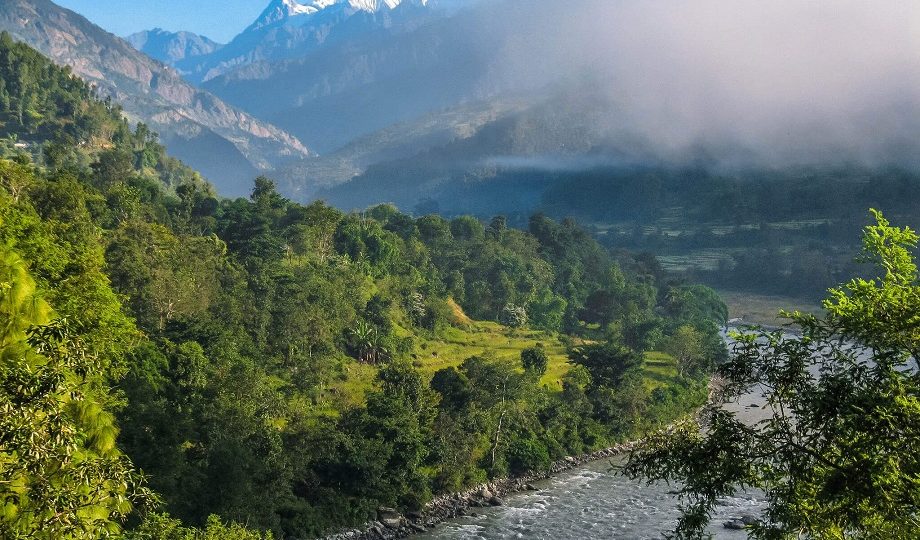 Ranging from the subtropical forests of the Terai to the great peaks of the Himalayas in the north, Nepal abounds with some of the most spectacular sceneries in the whole of Asia, with a variety of fauna and flora also unparalleled elsewhere in the region. Between Nepal’s geographical extremes, one may find every vegetational type, from the treeless steppes of the Trans-Himalayan region in the extreme north and the birch, silver fir, larch and hemlock of the higher valleys to the oak, pine and rhododendron of the intermediate altitudes and the great sal and sissau forests of the south.

The rolling densely forested hills and broad Dun valleys of the Terai along with other parts of the country were formerly, renowned for their abundance and variety o wildlife. Though somewhat depleted as a result of agricultural settlements, deforestation, poaching and other causes, Nepal can still boast richer and more varied flora and fauna than any other area in Asia. For practical purposes, Nepal’s flora and fauna can be divided into four regions:-

This includes the Terai plains and the broad flat valleys or Duns found between successive hill ranges. The dominant tree species of this area are Sal (Shorea Robusta), sometimes associated with Semal (Bombax malabricum), Asna (Terminalia termentosa), Dalbergia spp and other species, and Pinus rosburghi occurring on the higher ridges of the Churia hills, which in places reach an altitude of 1800m. Tall coarse two-meter high elephant grass originally covered much of the Dun valleys but has now been largely replaced by agricultural settlements. The pipal (ficus religiosa) and the ?banyan? (ficus bengalensis) are to be noticed with their specific natural characteristics. This tropical zone is Nepal?s richest area for wildlife, with gaurs, buffaloes, four species of deer, tigers, leopards and other animals found in the forest areas rhinoceros, swamp deer and hot deer found in the valley grasslands and two species of crocodile and the Gangetic dolphin inhabiting the rivers. The principal birds are the peacock, jungle fowl and black partridge, while migratory duck and geese swarm on the ponds and lakes and big rivers of Terai. Terai forests are full of jasmin, minosa, accecia reeds and bamboo.

This includes the Mahabharat Lekh, which rises to a height of about 2400m and comprises the outer wall of the Himalayan range. Great rivers such as the Karnali, Narayani, and Sapta Koshi flow through this area into the broad plains of the Terai. This zone also includes the so-called ?middle hills? which extend northwards in a somewhat confused maze of ridges and valleys to the foot of the great Himalayas. Among the tree species characteristic of this region are Castenopsis indica in association with Schima wallichii, and other species such as Alnus nepalensis, Acer oblongum and various species of oak and rhododendron which cover the higher slopes where deforestation has not yet taken place. Orchids clothe the stems of trees and gigantic climbers smother their heads. The variety and abundance of the flora and fauna increase progressively with decreasing altitude and increasing luxurance of the vegetation. This zone is generally poor in wildlife. The only mammals, which are at all widely distributed, are wild boar, barking deer, serow, ghoral and bears. Different varieties of birds are also found in this zone. Different varieties of birds are also found in this zone.

Northward, on the lower slopes and spurs of the great Himalayas, oaks and pines are the dominant species up to an altitude of about 2400m above which are found dense conifer forests including Picea, Tusga, Larix and Abies spp. The latter is usually confined to higher elevations with Betula typically marking the upper limit of the tree line. At about 3600 to 3900m, rhododendron, bamboo and maples are commonly associated with the coniferous zone. Composition of he forest varies considerably with coniferous predominating in the west and eracaceous in the east. The wildlife of this region includes the Himalayan bear, serow, ghoral, barking deer and wildboar, with Himalayan tahr sometimes being seen on steep rocky faces above 2400m. The red panda is among the more interesting of the mammals found in this zone; it appears to be fairly distributed in suitable areas of the forest above 1800m. The rich and varied avifauna of this region includes several spectacular and beautiful pheasants, including the Danfe pheasant, Nepal’s national bird.

Above the tree line, rhododendron, juniper scrub and other procumbent woody vegetation may extend to about 4200m where it is then succeeded by t a tundra-like association of short grasses, sedge mosses and alpine plants wherever there is sufficient soil. This continues up to the lower limit of perpetual snow and ice at about 5100m. The mammalian faun is sparse and unlikely to include any species other than Himalayan marmots, mouse hare, tahr, musk deer, snow leopard and occasionally blue sheep. In former times, the wild Yak and great Tibetan sheep could also be sighted in this region and it is possible that a few may still be surviving in areas such as Dolpa and Humla. The bird life at such as lammergeyer, snowcock, snowpatridge, choughs and bunting, with redstarts and dippers often seen along the streams and rivulets. Yaks are the only livestock, which thrive at high altitude. They serve both back and draught animals. The cheeses prepared out of the milk are edible for months. The female Yak provides milk to the Sherpas.
Of the wonderful flora and fauna must suffice to indicate what a paradise Nepal is to the lovers of wild animal and bird life, to the naturalists and to the foresters.