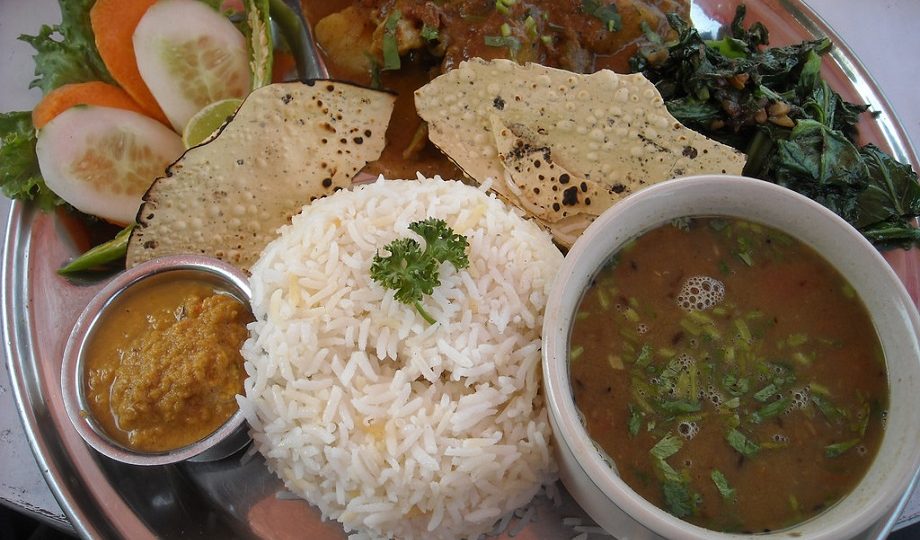 The most prevalent Nepali dish is ‘Daal, Bhaat and Tarkaari’ (lentils, rice, vegetable curry respectively). This is the main course served in the most Nepalese houses irrespective of the economic conditions, that too in both lunch as well as dinner. Nepali food is much less spicy than Indian food, and many dishes are Tibetan in origin. It seems that Indian influence is only confined to Southwestern part of Nepal. The rest of Nepal has more of Tibetan and Chinese influence in their cuisines.

Two of the most exclusive and authentic Nepalese delicacies include ‘Moos’, a meat or vegetable filled dumpling that is similar to Chinese pot-stickers and Tibetan Bread and Honey; a puffy fried bread with heavy raw honey. Both of these items are good for a light breakfast but are insufficient for a full meal. One delicacy that you do not want to miss while in Nepal is the dried meat. It makes a deadly combo with beer or any other alcoholic beverages. Newars, an ethnic group, are considered connoisseur of great foods. Watch out for Newari Restaurants. Surely it will be a great way to enjoy good food. In the Everest region try the local Sherpa dish of potato pancakes that are called Rikikul. They are delicious eaten straight off the griddle and covered with yak butter or cheese.

The food in Nepal differs from the one culture to another. However, here’s a typical sample of food from different cultures in Nepal.
Dal, Bhat and Tarkari – translated as Lentils, Rice and Curried vegetable. It is the main staple diet of most Nepali people.

Chatamari – (Newari) food resembles Pizza or Dosa (south Indian). rice flour flat bread cooked over heat with toppings such as minced meat (with or without some vegetable), egg, sugar or no toppings.

Wo – (Newari) flour patty made of lentils with or without meat/egg topping. used in ritual or festival or used as snack.

Dal – lentil soup usually eaten with rice. Most popular lentils used as Dal in Nepal are black, red and yellow.

Masu – meat with spices (curry) and gravy. (Usually served with rice) Most Nepalese eat chicken, mutton. Some eat buffalo and pork. Almost no one eats cow. Killing cow is prohibited in Nepal

Tarkari – Any kinds of vegetable or group of vegetables as curry, usually broth. can be made in thousand s ways.

Achar – a sour, spice or seet pickle. It can be made in thousand ways. The most poplar way is made of tomatoes, sliced radish, coriander, boiled or diced potatoes.
Sanya Khuna – (Newari) hot, spicy, salty jellotype food made from fish soup.

Rakshi – liquor (can mean local liquor)
Thon (Newari) or Chhyang (Tibetan) – the milky white beer/liquor made from fermented rice.
Tongba – It is especially popular alcoholic liquid in the hilly and mountain regions. It is specially made by pouring hot water into a pot of fermented millet and drunk with a bamboo straw.