Bhutan is cradled in the deep folds of the Himalayas. Very little has been heard of Bhutan and to most people it is a hidden kingdom shrouded in mystery. It is classed as one of the most exotic destinations in the world today. This kingdom often referred to as the last Shangri-la, a land of outstanding people, remarkable scenery, natural wonders with proud and vibrant culture. A unique and rare place that few people have the privilege of visiting. Bhutan is bounded by Tibetan regions of China in the north and sweltering plains of India in the south. This mountainous kingdom is well defined by Last Shangri-La or Land of the Thunder Dragon. The significant features of Bhutan vary from climatic conditions ranging from the sub-tropical to the cold reaches of the almost 25,000 ft of the Tibetan border. Today when almost all parts of the world has seen a surge in tourist numbers, Bhutan has continued to followed a policy of regulated tourism in order to safeguard the country’s natural environment, rich cultural heritage and the unique way of life for its people. Making Bhutan one of the least traveled countries in the world. Come explore and unravel the untouched wonders of Bhutan for yourself. Snow-capped mountains, emerald green landscapes, fascinating wildlife and gentle people all await you. Experience the hospitality of the Bhutan with Base Camp Adventure. This 04 days Bhutan Cultural tour will give you a complete cultural experiences in Bhutan

Landing in the Paro valley, surrounded by 4000 meter high mountains stretching across the west of Bhutan, enables you to have a visual landing which is indispensable and that makes your day an unforgettable one. Our Bhutanese representative will welcome you on arrival and drive you through the beautiful valley of Paro to the capital city Thimphu. (2 hrs drive) On the way to Thimphu visit Tamchhog Lhakhang, which is located on the opposite side of the river. This is a temple built by Thang Thong Gyalpo of Tibet.Later visit: Zorig Chusum Institute: 13 traditional arts and crafts. It was established in 1971 by the Royal Government in order to preserve the invaluable heritage and promote the arts of Bhutan. Hand Made Paper Factory: Jungshi Paper Factory was established in November 1990 as an undertaking of the Royal Government of Bhutan. Textile Museum: The foundation was laid in 2000 under the Royal Patronage of Her Majesty the Queen Ashi Sangay Choden Wangchuck. It was established with the aim of preserving and promoting Bhutanese textile arts. Thangtong Dewachen (nunnery): It was founded in 1976 by Rikey Jadrel, who is considered as emanation of Thangthong Gyalpo(1363 – 1485), the builder of numerous iron chain bridges across the Himalayas. Tashichho Dzong: Means Fortress of Glorious Religion. It was built in 1641 by Zhabdrung Ngawang Namgyel and was reconstructed into present structure by the late King. Sangaygang View Point: As well as being the location of the transmitter tower of the only national television tower in the country (BBS), the view point is also the perfect place to take in some truly breathtaking views of the entire city of Thimphu. Mini Zoo: Here we can see Bhutan’s national animal known as Takin. This is an extremely rare member of the goat family. Found in herds in the very high altitudes (13,125ft and over). Later you can stroll around the city and if you wish you can do some shopping.

Morning visit the weekend market. Market days are absolutely central to the lives of the Bhutanese, but there are many reasons to visit other than the icious fresh food on offer every Friday, Saturday and Sunday. Later take a hike to Cheri Monastery (includes Dodina and Jigme Dorji Wild life Sanctuary): The hike of about 2hrs leads to Cheri Goemba (Cheri Dorji Dhen). The trail starts by crossing a lovely covered bridge that spans the Wang Chu, and then climbs to the monastery. After visiting Cheri Monastery lunch and drive to Paro Valley (2 hours drive) In Paro visit the National Museum at Ta Dzong. Ta Dzong means watchtower and it actually served as a watchtower in the 17th century to guard to region from a possible Tibetan invasion. The interesting museum houses a fine collection of for example Bhutanese art, relics, religious Thangka`s. After Ta Dzong we also take you to Paro Rimpung Dzong. Rimpung Dzong means fortress in the heap of jewels. It was build in 1644 by Zhabdrung, who till today is deeply revered by the Bhutanese people as a dynamical political and spiritual leader. Especially from the other side of the river very nice pictures can be taken of the majestic Paro Dzong with Ta Dzong at the background.

Generally regarded as Bhutan’s most recognizable cultural icon, the Taktsang Monastery, or Tiger`s Nest, is strikingly iconic of the country’s culture and traditions. Farmhouse: Bhutan is justly not famous for its cuisine, which is somewhat predictable. Eating at a local farmhouse at least gives a slightly different variation.

After breakfast in the hotel drive to Paro airport in time to catch up your onward flight. Your escort from Bhutan Discovery will bid you farewell and soon the remote and legendary Dragon Kingdom disappears again behind its guardian mountains. 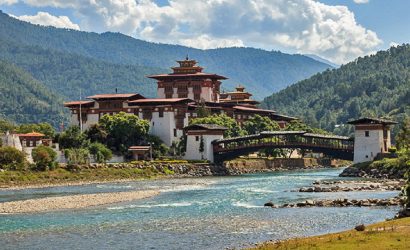 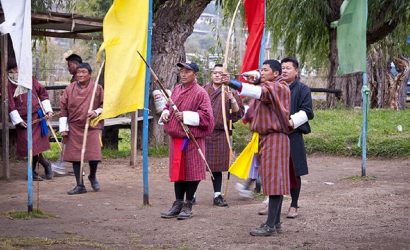 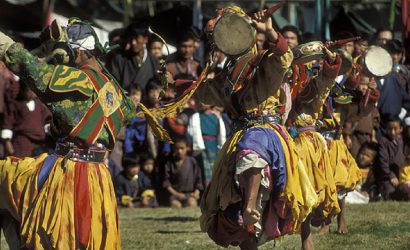 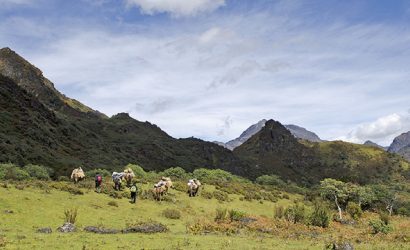 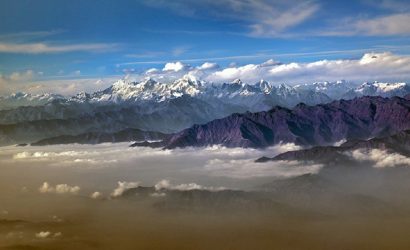