Home>Blog>Nepal>Trekking in Nepal in April 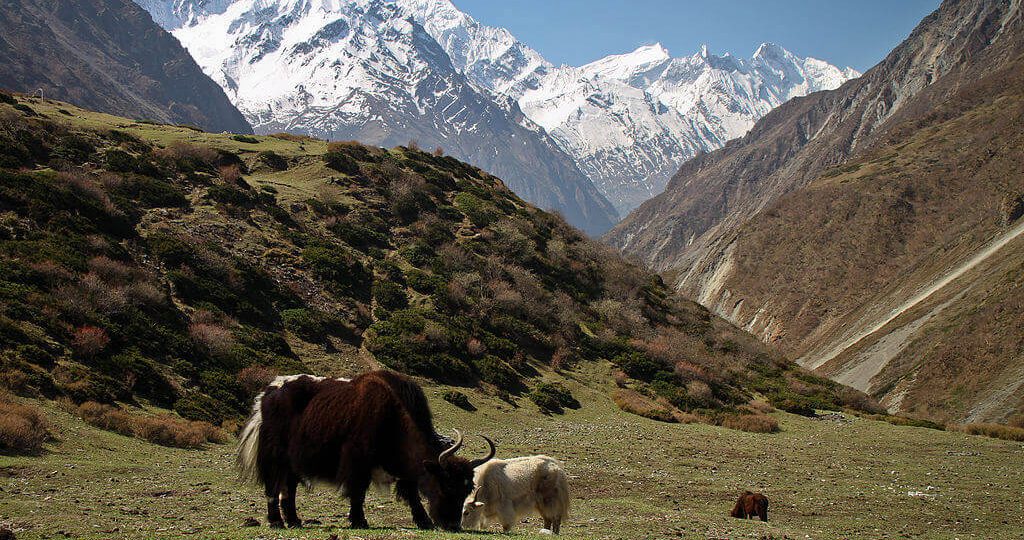 April is the second best season for trekking in Nepal. In Nepal, April is spring and the temperature is the most favorable for trekking. Due to this, Trekking in Nepal in April is quite popular and it does attract a lot of trekkers from around the world.

With an end to winter, April brings a clear view of the mountains and the wilderness back to life.

April is the perfect time to travel to Nepal if you are a nature lover. The blooming flowers and the color add a welcoming vibe to the environment.

The color of Rhododendron contrasts best with the white of the snow-capped mountains. You might also spot a wide range of wild birds and rare animals too.

The season is highly popular for trekking, a huge crowd is obvious. Pre-book your treks if you are planning to trek in Nepal in April.

April also includes few of the Nepali festivals and celebrations.

Weather while Trekking in Nepal in April 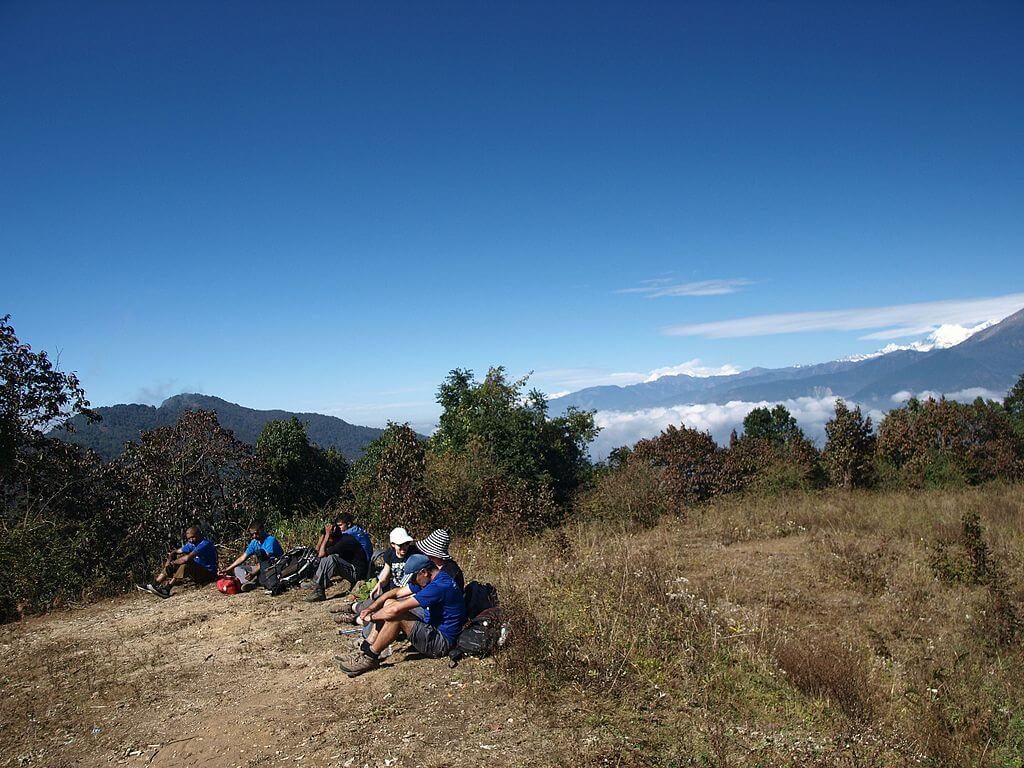 The weather in April is perfect for trekking in Nepal. The climate is warm in the lower elevation and cold in the higher elevation but quite moderate.

The mornings and evenings of the higher altitude can be a bit colder. But the day is warm and pleasant. The days are longer and soothing for a relaxing trek.

Over 3500 m, the temperature can get below freezing point at night. The temperature at 2000 m is about 20+ degree during the day and about 7 degrees at night.

The high pass routes are snow free and the views are clearer. The warm sun leads to fewer clouds.

Even though the weather is favorable, occasional thunderstorms or rain can occur. The average amount of rain in April is 57mm. Make sure you carry a light rain jacket and rain cover.

In Annapurna and Everest region, rainfall is less than 25m and the trails are still good for trekking.

Highlights of Trekking in Nepal in April

One of the main reason why April is famous in Nepal for trekking is the weather of the time. The views and the skies are very clear during this season. You will be able to see most of the mountain ranges of the Himalayas.

Mountains from Annapurna region, Everest region, Machhapuchhre region, etc. can be visible. No matter which trekking route you choose, the visibility is majestic.

The paths are best for trekking purpose. This season, the snow clears off and the walks will be easier.

Whether it’s aerial sightseeing or trekking, the scenes will have you mesmerized. Himalayan ranges of the Annapurna region, Everest region, Manaslu region includes spectacular mountains. Some are Annapurna, Machhapuchhre, Everest, Nilgiri, Dhaulagiri, Makalu, and Ama Dablam.

The forests are more lush and green this season. This makes the vegetation of Nepal more vibrant and beautiful. Rivers,lakes, and waterfalls will refresh your mind and soul during the trek.

Festivals like Buddha Jayanti is in April. Holi is also another festival that people celebrate. The color of joys and friendship will keep you tied to the bond for an entire lifetime. Not to forget, Nepali New Year is in April too.

April is a perfect season for trekking and visiting Nepal. All the aspects are in favor of trekking this season. But the best part is you have multiple options to choose your route of trekking.

The top trekking destinations are from Annapurna and Everest region. Shorter treks include Poon Hill trek, Mustang trek, and more.

Unlike any other season, April invites people from around the world. Many trekkers choose the peak seasons so it becomes quite crowded which is why pre-booking is important. Despite the crowd, you will get the trekking permits easily.

You can easily have access to the permits in the entrance gates or in Nepal Tourism Board Office, or TAAN office.

Tips and Essentials for Trekking in Nepal in April

There are certain tips for a successful and enjoyable trekking experience. 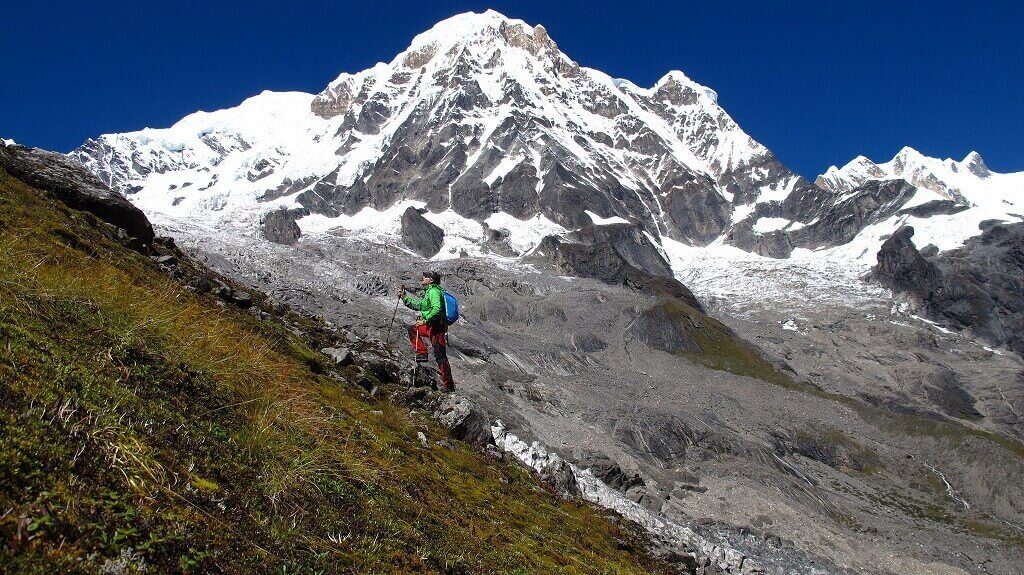 Annapurna Base Camp trek is not only perfect in April but is also one of the easy trekking destinations. You will see different mountain ranges of the Annapurna region from ABC. The majestic view of the Dhaulagiri, Manaslu, Nilgiri, Machhapuchhre, etc. is visible.

You will also pass through the Machhapuchhre Base Camp on the way.

ABC is famous for its awesome teahouses. The trek is also famous for the natural hot springs at Jhinu Danda.

The higher altitude is where the Gurung and Magar settlement is at. The locals’ way of living and working will give you a different feel.

You can witness the wide species of birds and animals in the Annapurna Conservation Area.

With this moderate trek to the Everest Base Camp, you can make the best out of your time in April. The main purpose people visit EBC is because of the view of the highest mountain in the world, Mount Everest.

April is the perfect time for a splendid view of Mount Everest. But the world’s most beautiful mountain, Ama Dablam is also visible on the way. With acclimatization in Namche Bazaar, the trek will be easy.

Making a way from Lukla to Namche Bazaar, you will see the vegetation and the local Sherpa community. Khumbu Glacier and Kala Patthar add a unique feature to the trek.

April makes the view clearer and the weather warmer for this trek. The monasteries at Tengboche portrays the cultural aspect of the trek.

You will encounter protected plants and animals at Sagarmatha National Park. Since April is one of the best seasons, the permits are easily available.

You will also meet travelers from around the world to share experiences with.

Manaslu Circuit Trek trek introduces you to the isolated Himalayan foothills, preserved areas, and the remote villages. This trek is difficult but with enough exercise anyone can do it.

You will witness the world’s highest mountain Mt. Manaslu. The tea houses at Dharmashala, Gurung community will add to an adventurous and unforgettable trek.

You will also walk past Tsum Valley, the hidden valley of Buddhism. The locals are friendly and treat you with love.

On the way back home, you will go through many waterfalls, rivers and lush forest that adds beauty in the trek of April. 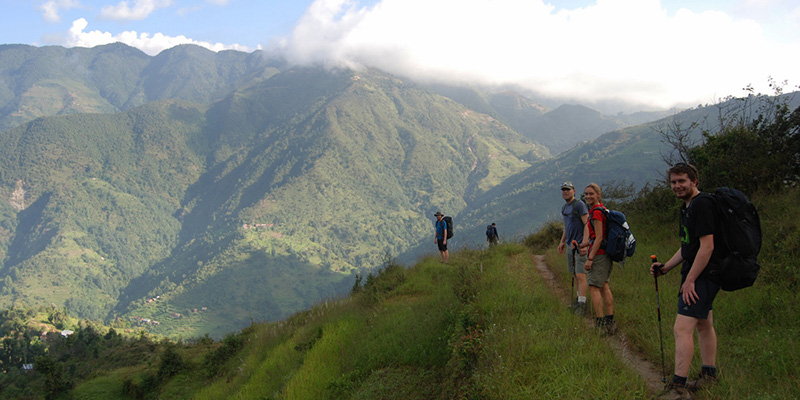 Langtang Valley Trek is one of the closest treks from Kathmandu. April makes the valley dry and the humidity is low so the season is perfect for trekking.

The temperature can be between 5 – 10 degree during the day and up to -2 during mornings and night at the Kyanjin Station.

Rhododendron, pine trees, and the bamboo forests will go with you on this delightful trek. You will also pass through Langtang National Park which is one of the specialties of the trek. You can spot animals like red panda, langur, snow leopard, musk deer, bear, etc.

The views include mountains from the Langtang Himalayan Ranges. You can see mountains like Langtang Lirung, Ganchhenpo, Dokpu, Naya Kangri, Yala peaks and more. You can also see Mt. Ganesh, Mt. Manaslu and Jugal Himal as well.

The vision is clearer with the perfect shade of the blue sky.

You will also see some of the finest Buddhist heritages including Kyanjin Gompa monastery (3740 m). The Tibetan lifestyle influences the local living style because the valley used to be the trade route to Tibet a long time ago.

This is a challenging trek but with physical exercise, everyone can do it. April is one of the months which is very good for the Makalu Base Camp Trek. It has five major ecological zones so you will see wide species of rare flora and fauna.

One of the main treasure of this trek is the Makalu Barun National Park in Solukhumbu district. The trial of this trek will take you to the Arun River Valley here. You will reach the Base Camp through Shipton Pass.

You can see the south face of the world’s fifth highest mountain, Makalu. You can also see Mount Everest, Chamlang Himal, and Lhotse.

You will also walk past the Barun Glacier. The lower part of the Barun and Arun valley leads you to the communities of Rai, Sherpa, and Shingsawa farmers. The locals have a very simple lifestyle and are very friendly.

The journey takes you on some of the most remote areas of Nepal. Makalu Base Camp trek is not popular like the other treks because of the inaccessibility. The journey is adventurous and you will enjoy to the fullest nonetheless.

Upper Mustang, the forbidden kingdom is one of the top trekking destinations in Nepal. It is a rare privilege to enter the valley. It borders with Tibet and has Tibetan influence as well.

Having the influence of Tibet from the north, the cultures are similar. The people also speak the same language there. Upper Mustang resembles the culture of Tibet as well.

April is a dry season in Mustang so there won’t be the monsoon. In fact, it is best if you start your trek from Lower Mustang in this season. The temperature is warmer in the lower Mustang region.

This time is also perfect if you want to cross higher passes. Due to a warmer temperature, the river will melt in the lower region. The climate and the temperature make it a perfect time to trek to Upper Mustang.

At the end of the valley, a 2000-year-old cave is absolutely mystical and magical.

Moreover, you will pass through the beautiful villages of Mustang. After a flight to Jomsom from Pokhara, you will make your way to the Kagbeni Village. The culture, language and the natural diversity of the village will make you feel like you are somewhere different.

You can learn about their own world and share some story about yours.

From Kagbeni, you will head towards Lo Manthang. Lo Manthang used to have their own king before. But you can still witness the Lo Manthang palace.

To cross Kagbeni you will require a special permit. You can walk through the trails of Mustang with many Buddhist shrines and monasteries. And you will also pass Muktinath temple, Vishnu Temple, and Jwalamai.

The beginning of April brings a pleasant time and surrounding perfect for kindling trekking experiences. Regardless of which route you choose to explore, the journey will be worthwhile.

The trekking in Nepal in April has many offerings that will make the best out of your adventure holiday. The love and warmth of the locals to the cultural richness, there are a lot of aspects to take back home and spring is no doubt the best season.

For further details and inquiries please feel free to contact us.

Trekking in Nepal in September 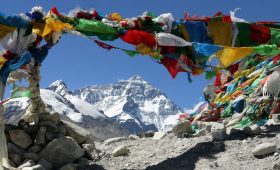 Everest Base Camp Trek in June 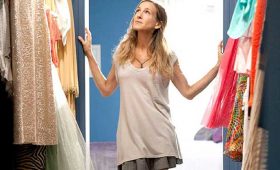 What to wear in Nepal?