A question in every traveler’s mind is Where is Mount Manaslu Located? You must have heard a lot about Manaslu Expedition and Manaslu Trek from various trekkers and climbers.

After hearing so much about the beauty of Manaslu and the adventure it offers, you must be curious about its whereabouts. Well, Our article on Where Mount Manaslu is located will be helpful for you. it explains to you about the geography, best time, and many more

Before knowing more about the Manaslu trek and expedition, you should know about its geography.

Where is Mount Manaslu Located? 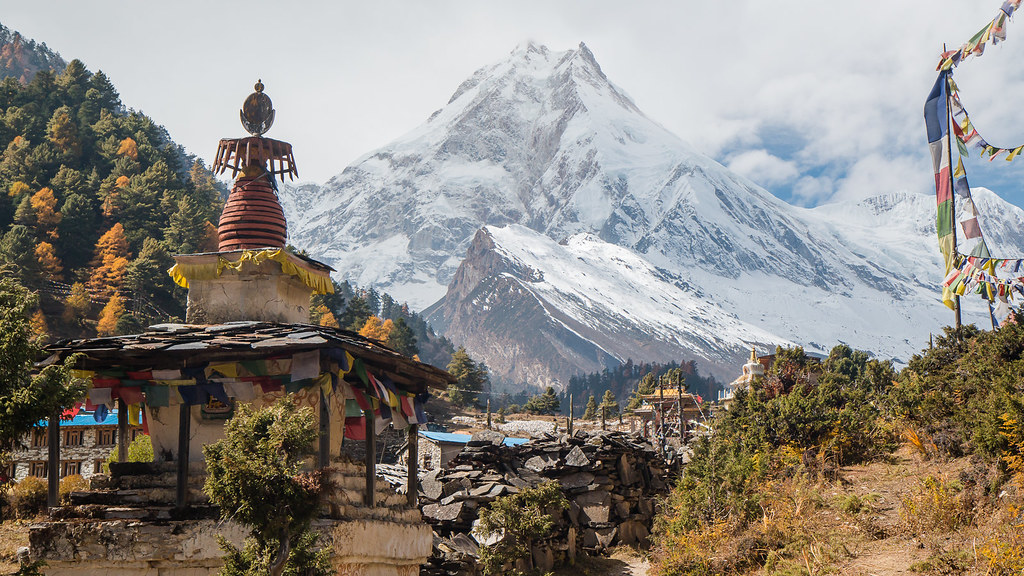 Mount Manaslu is located in the Gorkha district of Manang- Gandaki Zone on Nepal’s west-central side. The mountain is a part of the Mansiri Himal in the Himalayas, and its coordinates are 28° 32’ 58” N and84° 33’ 43” E.

Mount Manaslu lies about 64 km/ 40 mi east of Annapurna and is the highest peak in the Gorkha district. The topographic Isolation of Mount Manaslu is approximately 106 km/ 66 mi.

In 1997, the government opened the Manaslu Conservation Area project with the primary goal of conserving and sustaining management in the delimited area of Manaslu.

About Mount Manaslu and Expedition

Mount Manaslu is also known as Kutang, ranked as the 8th highest peak in the world. This mountain elevates at 8163 m/ 26781 ft above sea level listed in the eight-thousanders.

The name Manaslu derives from the Sanskrit word Manasa meaning soul or intellect. The name of the peak translates to Mountain of the Spirit. The mountain was first submitted on May 9, 1956, by the members of the Japanese expedition.

By May 2008, mountaineers climbed the mountain 297 times with 53 fatalities. The mountain is a dominant feature that towers above its surroundings and offers a feasible approach from all directions due to its long ridge and valley glaciers.

This mountain has three sides that fall in step to terraced land down below inhabited for agriculture operations. 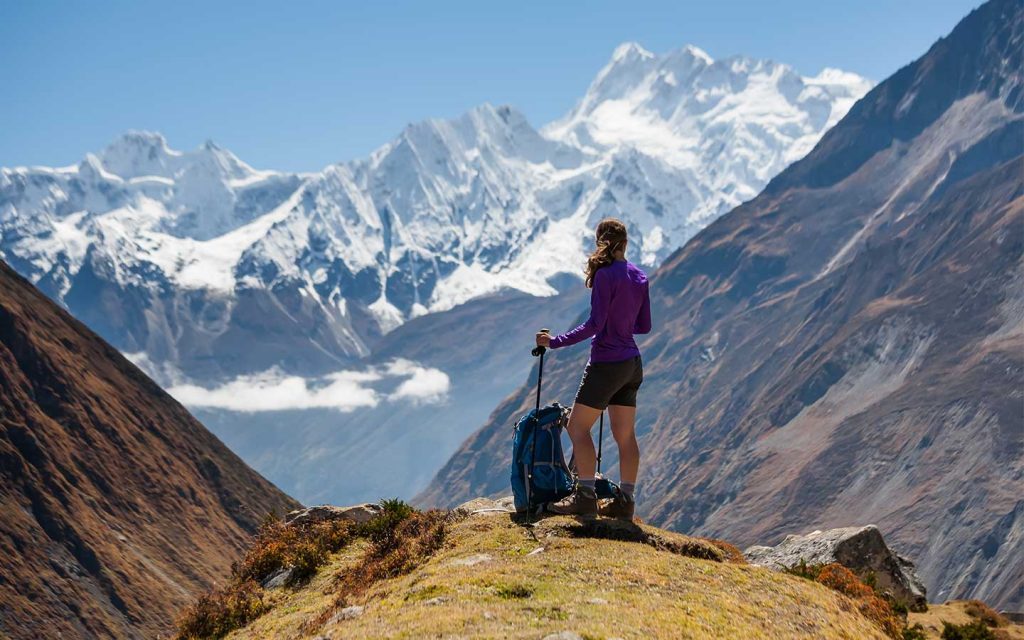 Other than expeditions, the Manaslu region offers trekking options as well. The most popular Manaslu trek is its 177 km/ 110 mi long trekking route that circles the Manaslu massif over the bequeath to Annapurna.

The trekking circuit for Manaslu was opened in 1991 by the Nepalese Government. The trekking trails pass through an ancient salt-trading route along the Budhi Gandaki river.

The trails of Manaslu provide a beautiful view of snow-covered peaks and close interaction with different ethnic groups living there. You walk through mountainous terrain encountering the passing yaks.

The trails are prone to landslides during the monsoon making the Manaslu Circuit Trek a test of endurance. 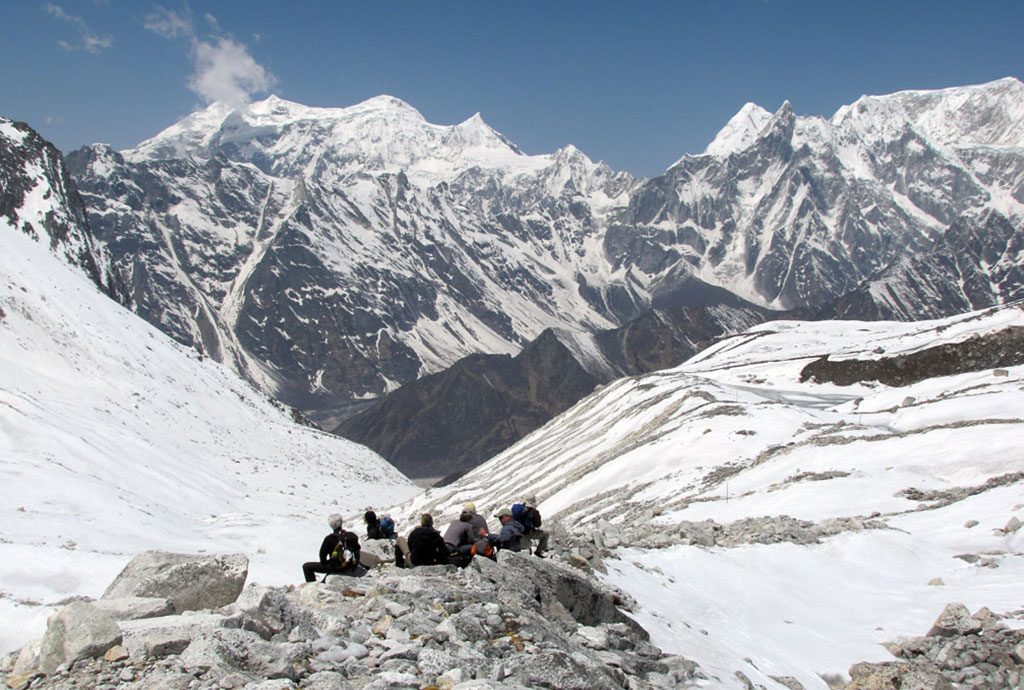 Six available trekking routes lead to the peak but climbing from the south is the most difficult one.

The permanent snow line lies above 5000 m/ 16000 ft altitude. The area has precipitation due to snowfall and rainfall. On an average scale, it rains about 1900 mm annually, and most begin during the monsoon season.

In the sub-alpine area, the annual temperature ranges from 6 to 10 ℃ /43- 50 ℉. There is snowfall from December to May in this zone. The arctic area falls in the permanent snow line zone, so the temperature is always below the freezing point. 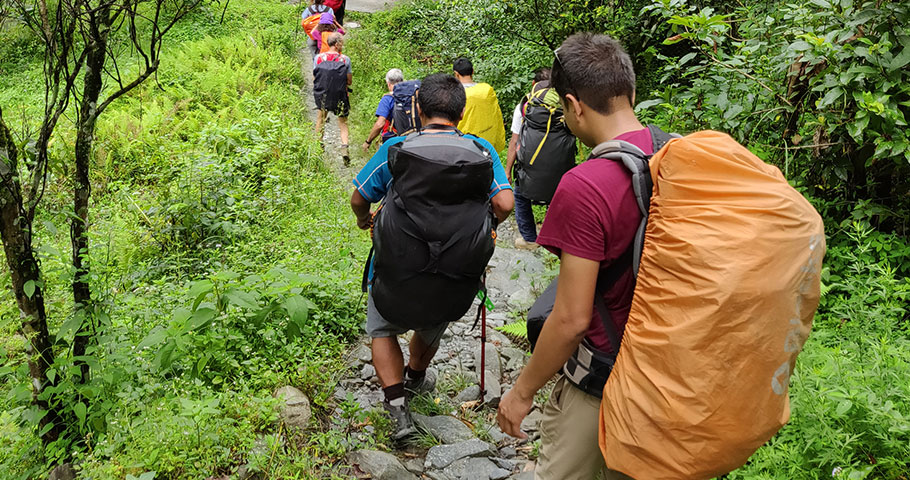 To complete the Manaslu expedition, you follow the North East Ridge route. The journey starts by following the trail up along the Budi Gandaki valley to Samagaon.

You make your first acclimatization here at 3500 m above. Then you trek towards Manaslu Base Camp, standing at an elevation of 4750 m. You follow the bamboo marker wands from there to the Manaslu Glacier.

From here, the technical part begins; you cross the crevasses and other dangerous Manaslu sections using fixed ropes. Finally arriving at camp I standing at 5700 m, you set your first Manaslu Expedition Camp beneath the north peak.

The climb from camp I to camp II has the most technical section. Camp II lies in a flat area at the height of 6400 m, right above the snowy terrace with low snow accumulation.

The trek from camp II to camp III has the shortest distance, which takes about 3 hours. You don’t need any ladders for crossing this day, but you have to jump in a few crevasses.

Camp III lies at an elevation of 6800 m just below the Col to avoid the strong winds. The climb from camp III to camp IV is the longest as you climb near the death zone.

In between this distance, you have to cross a steep 50- 55 degree slope. After a few hours of climb, you reach camp IV at 7400 m elevation. From here, you walk to summit Mount Manaslu. 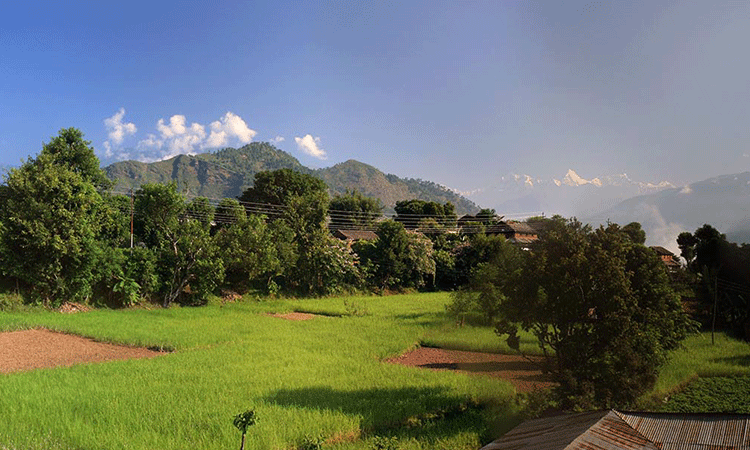 Day 2-3: Preparation for the climb and sightseeing around the valley 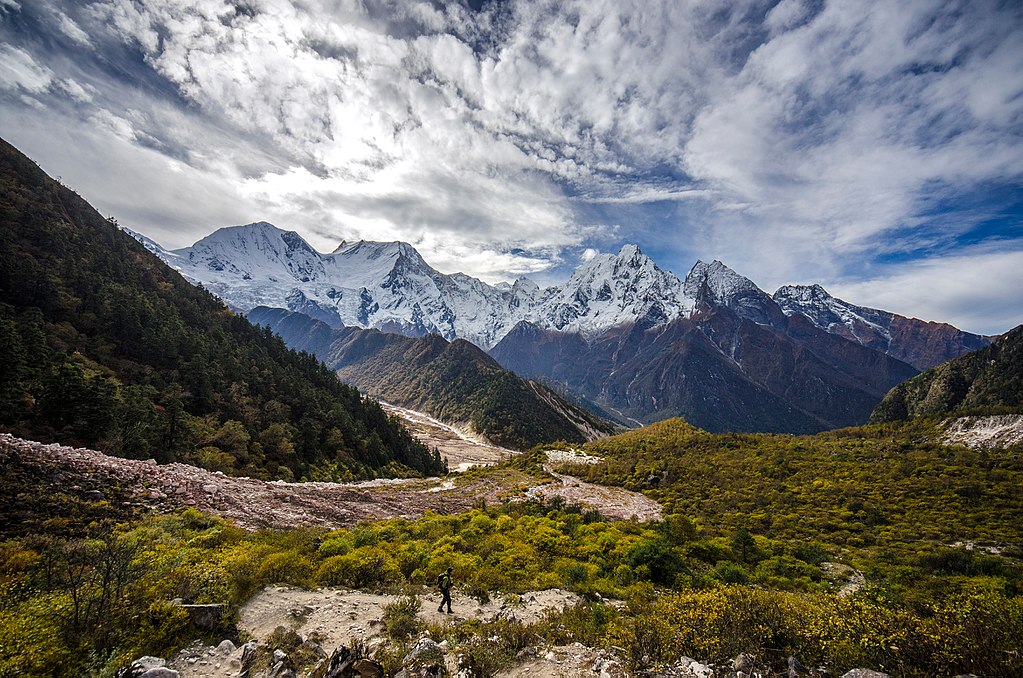 You begin the trek by driving from Kathmandu to Soti Khola via Arughat. Then You trek to Maccha Khola and stay the night there. From there, you walk to Jagat then Philim, a beautiful Gurung village.

After a relaxing night, you now head towards Deng then to Ghap the next day. From Ghap, you trek till Lho and Stay the night. The following day you head to Sama Gaon, where you acclimatize.

After the rest day, you again trek to Samdo and acclimatize there. From Samdo, you head towards Dharamsala, then to Bimthnag via Larkya La Pass, the highest point.

Today is the last day in the Manaslu region; you head to Dharapani from Bimthang. The next day you drive back to Kathmandu and depart from there.

Best time to visit Mount Manaslu for Trek and Expedition 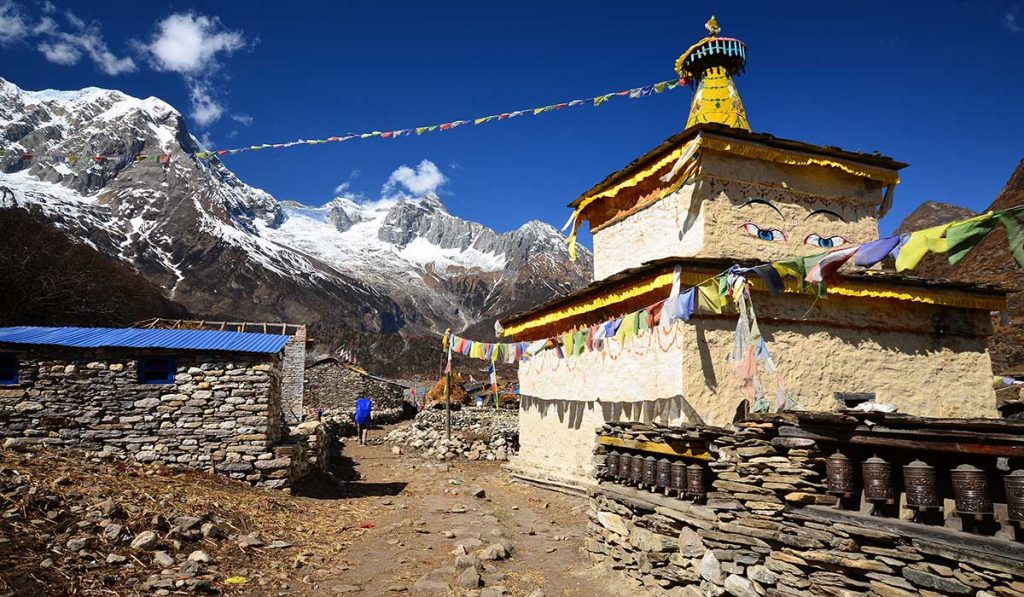 Every year the remoteness and adventure of Mount Manaslu attract travelers from around the globe. The best time for the mount Manaslu expedition is around the spring and autumn season.

This is a pre-monsoon season in Nepal that brings new beginnings around the country. You can see new buds blooming in the paths, making it seem the forests have come to life again.

The season falls in the month of March, April, and May. The weather is stable and warm during these months. The temperature is also moderate, with good visibility of the scenarios.

March is the starting time of the spring season. The climate is bearable as it is not too cold nor too hot during this time. Winter has just finished, so that it can be chilly throughout the month. Most of the lodges that were closed for winter reopen from this month.

April is the best month in the spring season that makes your journey to Manaslu Circuit adventurous. The trails are full of colorful flowers and greenery that show beautiful views of mountains as well. Relatively, the routes are not very crowded during this month.

May specifies the ending of the spring season and increase of the temperature in the region. The climate is humid and a bit hot at this time. The trek during the daytime gets sweaty in lower areas while the temperature in higher altitudes remains mild.

Autumn is the uttermost trekking season in Nepal and the post-monsoon season that stabilizes the weather conditions. The skies are crystal clear with stable temperatures, warm days, and chilly nights.

The biggest festivals of Nepal Dashain and Tihar fall in this season. These are the main attractions of Autumn with a freshness of happiness in people around the country.

The season falls in the month of October, November, and December. The climate is dry during this time of the year, and chances of the temperature dropping below freezing point, especially in October and November.

Trekkers and climbers consider Autumn the best time to Visit Mount Manaslu for trek and expedition. Many visit this region during this season, making the routes crowded.

September is the starting time of Autumn, indicating the end of the rainy season. The monsoon season ends by the mid of September, so there are slight chances of light showers during this time. But by the end of this month, the weather stabilizes, making the trek and expedition wonderful in full swing. The trails are busy this month.

Overall, October is the best month to visit Mount Manaslu for Trek and expedition in a year. The weather is comfortable and gives the perfect view of the fantastic mountains. The breathtaking view of snowy peaks surrounds you throughout the trials. The trails are the most crowded at this time, so it is recommended to pre-book transportation and accommodation.

November month marks the end of the autumn season. The temperature begins to drop significantly and decreases to minus zero during morning and night in high altitude areas. However, the views are the same, surrounded by breathtaking scenarios of glaciers and mountains.

Trek and expedition during Winter and Monsoon Season 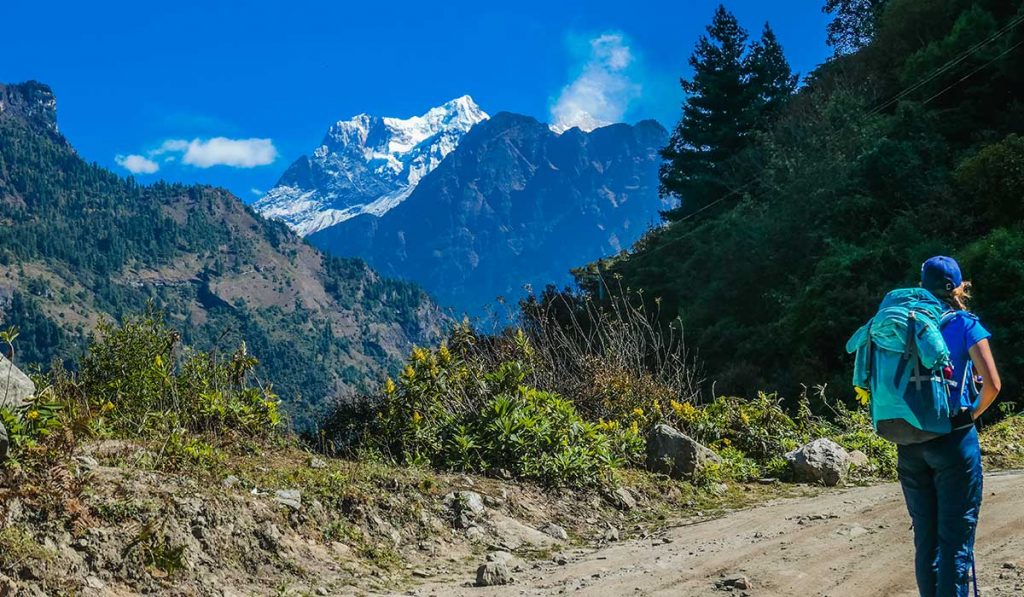 Winter and Monsoon season offer various challenges and difficulties. But the treks and expedition are possible during these seasons as well.

The Winter season has one of the clearest skies and dry weather conditions. The climate during the day is warm while it keeps decreasing along with the sunset. The temperature quickly drops below freezing in the night and early mornings.

The season falls in the month of December, January, and February. The no. of travelers decreases during this season. Trekking is possible during these months, but expeditions have no to fewer chances of completion.

The people from Samdo village move to lower areas around mid-December to escape the cold. So, many tea-houses are closed, with only a few remaining behind to look after the town.

The cold increases by January, creating high chances of snowfall. The snow-covered trails add challenge and struggle for travelers. The season falls in the months of December, January, and February.

Monsoon Season starts from mid-June and ends in August in the context of Nepal. The country receives more than 80% of rainfall during this time among all the other seasons.

Due to continuous heavy rain showers, trekking and expedition become complex and challenging. The trails are slippery, muddy, and have an occurrence of Landslides and floods.

Another disadvantage is the hidden views of peaks and landscapes behind the dark clouds. Also, these things add unpredictable adventure for the trekkers and climbers.

With constant rainfall, the temperature drops significantly with an increase in Humidity. But on the plus side, the trails and surroundings are dust and pollution-free.

However, when the rain stops, you will be rewarded by the freshness and amazing views of the landscapes and mountains. Also, the trails will have an absence of heavy crowds.

We hope after reading the article you have found your answer on Where is Mount Manaslu Located. If you are planning a journey to Mount Manaslu, then be well-prepared. You can know more about the best time and prepare beforehand for the trek or expedition. 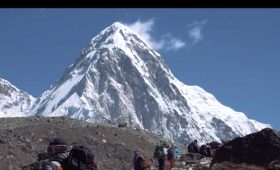 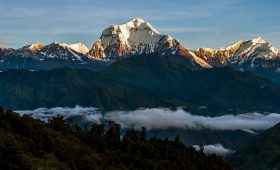